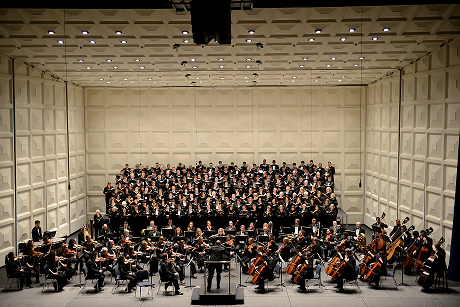 The Distinguished Artists Series is part of a comprehensive program developed by the Naval Academy's Senior Leadership to enrich the education of Midshipmen through exposure and involvement with fine arts. This series has presented the world's finest classical and cultural performers to the Academy with an annual mix of Opera, Ballet, Orchestra, and diverse international ensembles. The Distinguished Artists Series was launched with the opening of Alumni Hall, and for the past 29 years, has enjoyed the support of the Navy's most senior officers, the Naval Academy's faculty and staff, the Midshipmen, and the greater Academy community.

Heard nationwide as the host of NPR’s beloved program From the Top, Peter Dugan has appeared as a soloist, recitalist, and chamber musician across North America and abroad.  In 2020, he joined violinist Joshua Bell for At Home With Music, a national PBS broadcast and live album release on Sony Classical.  Prizing versatility as the key to the future of classical music, Mr. Dugan is equally at home in classical, jazz, and pop idioms.

A sought-after multi-genre artist, Mr. Dugan has performed in duos and trios with artists ranging from Itzhak Perlman and Renee Fleming to Jesse Colin Young and Glenn Close. The Wall Street Journal described Mr. Dugan’s collaboration with violinist Charles Yang as a “classical-meets-rockstar duo.” Mr. Dugan has been presented in chamber music recitals by Carnegie Hall, Chamber Music Society of Palm Beach, Music at Menlo, Saratoga Performing Arts Center, and the Moab Music Festival.  He was the 2019 featured recitalist for the California Association of Professional Music Teachers and has soloed with the San Francisco Symphony, Houston Symphony, Kansas City Symphony, New World Symphony, and Mid-Texas Symphony.

His debut album with baritone John Brancy –  A Silent Night: A WWI Memorial in Song – pays homage to composers who lived through, fought in, and died in the Great War. Brancy and Dugan toured this program across North America in commemoration of the centennial of WWI, including performances at The Kennedy Center, Alice Tully Hall, Stanford University, the United States Naval Academy, and the Smithsonian Institute.  Together Brancy and Dugan won first prize at the 2018 Montreal International Music Competition and second prize at the 2017 Wigmore Hall International Song Competition.

Mr. Dugan advocates the importance of music in the community and at all levels of society.  As a founding creator of Operation Superpower, a superhero opera for children, he has traveled to dozens of schools in the greater New York area, performing for students and encouraging them to use their talents – their superpowers – for good.

Join us for an intimate Distinguished Artist Series concert in historic Mahan Hall – you will not want to miss this special performance from one of the world’s most incredible pianists!