The Army-Navy Game: A Battle for the Ball—and Bragging Rights 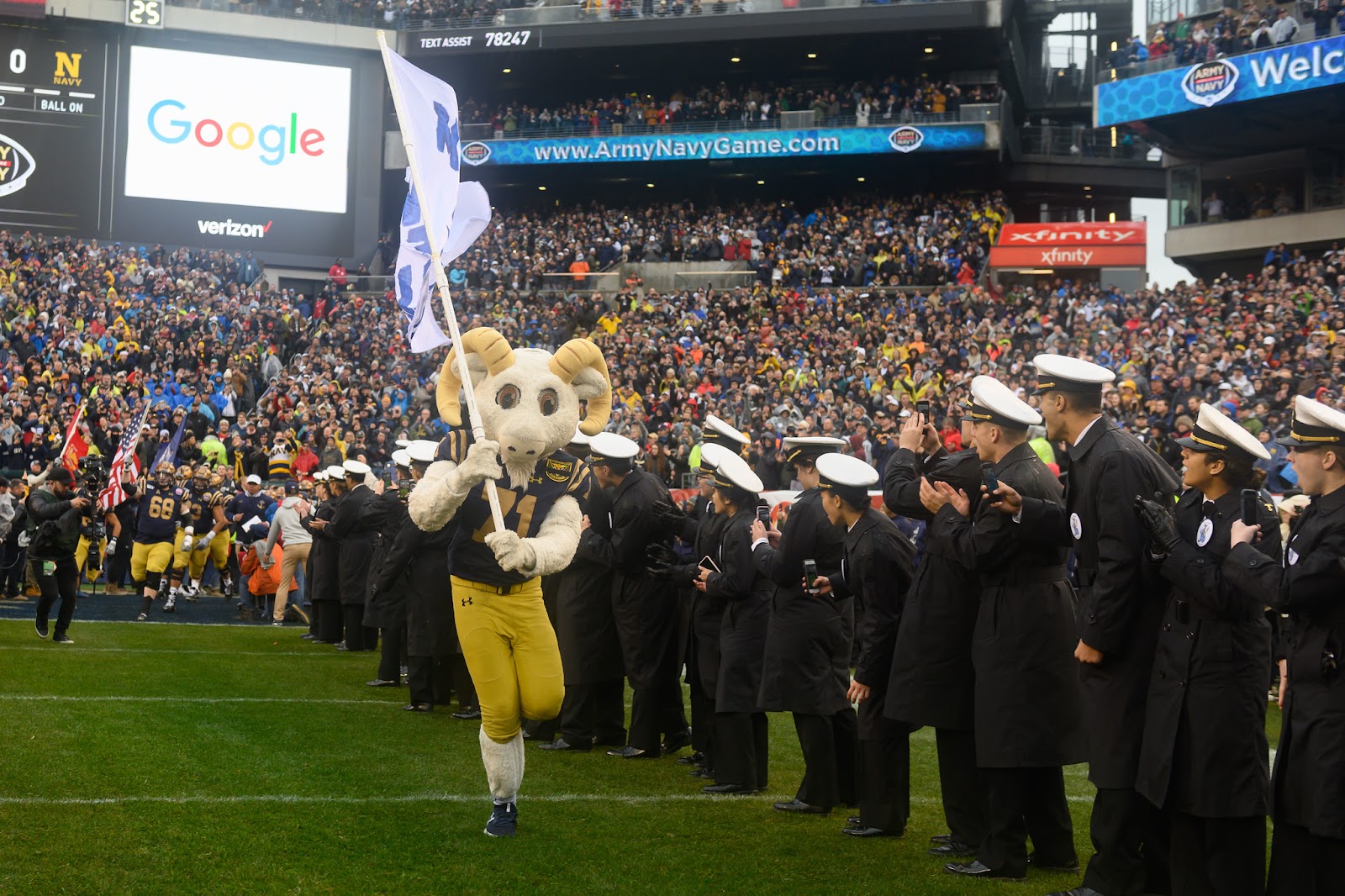 The Army-Navy game is almost here! I can’t wait for the December 11th trip to MetLife Stadium in New Jersey, where we’ll be surrounded by up to 82,000 passionate fans. Just like my great-great-grand goats before me, I’m representing the midshipmen as we do battle with our comrades in arms, the cadets of Army. Kickoff is at 3pm. If history is any indication, “America’s Game” will be an epic experience.

A Heck of a History

The rivalry began when the fledgling military academies met on the gridiron on November 29, 1890 at West Point. Navy shut out Army 24-0. A tradition was born.

My story becomes intertwined in 1893, when my ancestor, El Cid (aka the Chief) was presented to the midshipmen for good luck by officers on the USS New York. He was ferried to the fourth Army-Navy game, and with a Navy win, El Cid and his kin clinched the role of Naval Academy mascot.

The inaugural football game of the 1900s, held in Philadelphia on Franklin Field, introduced the Army mule for the first time. My great-great-great-grand goat, lent by the USS New York, represented the midshipmen. He was outfitted in a beautiful blanket adorned with the gold “NAVY” on both sides. Not to be outdone, the mule showed up with a “No Ships for Me/I’m a Bit of a Kicker Myself” Army uniform. Once again, my lucky grand goat brought home an 11-7 victory. 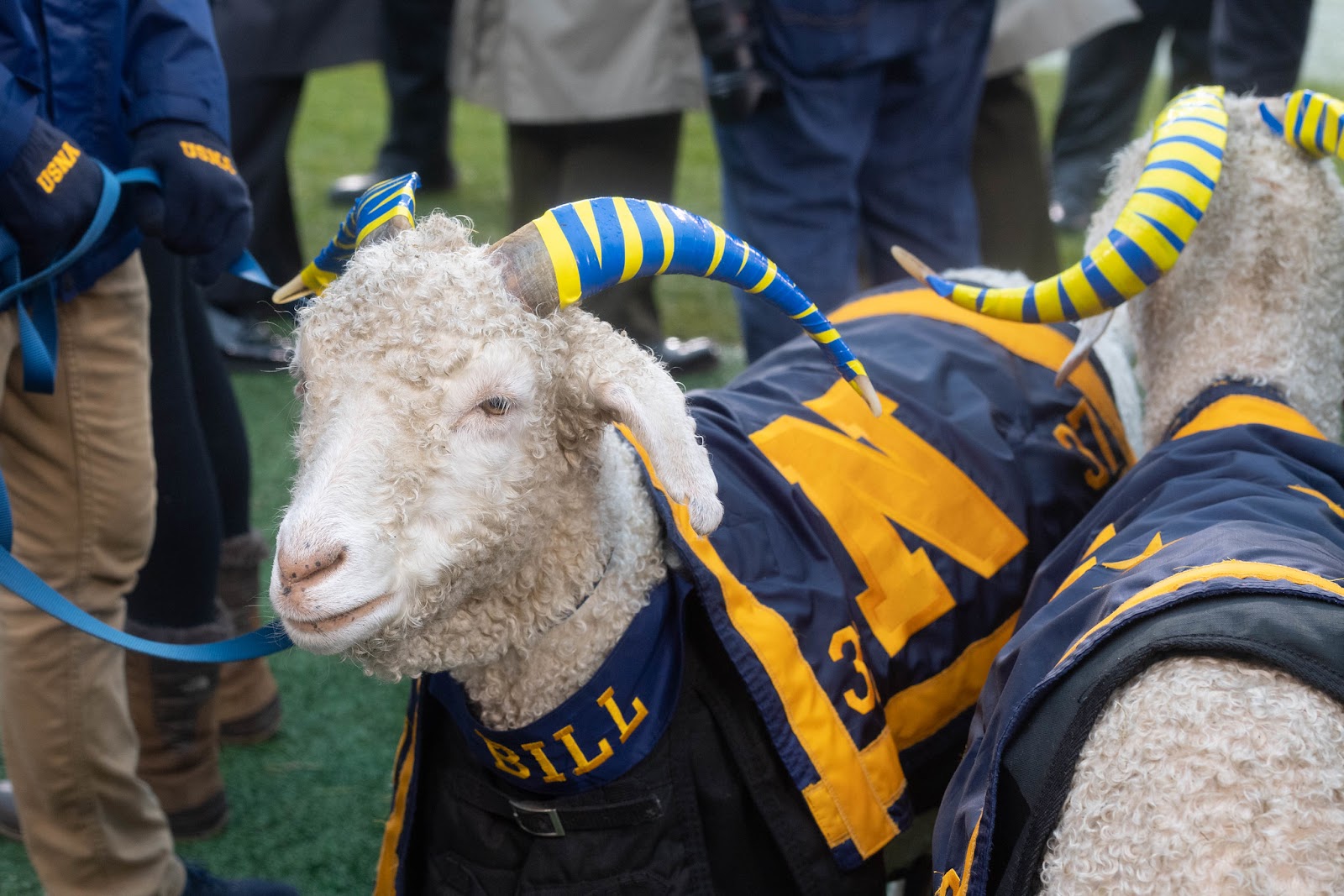 Navy continues to rule the rivalry, with a combined 61 wins over Army’s 52. There were seven ties over all those years, and several disruptions in play due to war and other events. But it became a wonderful tradition in the hearts and minds of both academies. The game continues to serve as the season finale, anticipated not only for the play on the field, but the overall pomp and circumstance that occurs throughout with me and the mule in the center of the traditions.

Before the coin toss, I like to explore the pre-game tailgating--not only are fans cooking up yummies, but the sight of the blue and gold flags flying throughout the parking lot and the “Go Navy Beat Army” spirit deliver on the energy and excitement of the day! I’m ready to help the midshipmen bring a win home to Annapolis! To make your tailgate a winner, Navyonline has some fun and festive authentic Navy gear and games that I would love to see around town, in the stands, and in the parking lots!

Upon entering the stadium, the stirring “March On” tradition, where the entire Brigade and the Corps of Cadets march on to the field in formation, gives me goat-bumps (and enthusiasm a-plenty). Loyal fans, cheering on these thousands of men and women in impeccable uniforms moving in sync, are filled with pride; even if you are watching from home, it’s an inspiring sight to see. Before my goat-bumps have a chance to recover, my heart pounds as the deafening Navy jet flyover kicks off the game with a bang. If the President of the United States is in attendance, Air Force One will also make this impressive run. The excitement builds as the Navy Leap Frogs and Army Black Knights descend dramatically by parachute onto the turf. I’m so proud to be the Navy goat!

Prior to this special game, both teams also engage in a “prisoner exchange,” whereby the students participating in the Service Academy Exchange Program from the fall semester are returned to their original school to cheer on their team and mark the completion of their time in the program. Luckily for me, mules and goats are not exchanged!

The incredible energy and excitement pulse through the stadium, as the midshipmen cheer on their team with hat waving, pushups and good-spirited shouting. When the clock buzzes after four hard-fought quarters of football, people stream out of the stadium and alumni stand at attention. After a Navy win, Army sings their alma mater, followed by the midshipmen and all Navy fans singing their alma mater, “The Navy Blue and Gold”. Both tired teams respectfully stand at attention for both songs. It’s a powerful moment, and I love joining in with these sensational lyrics. 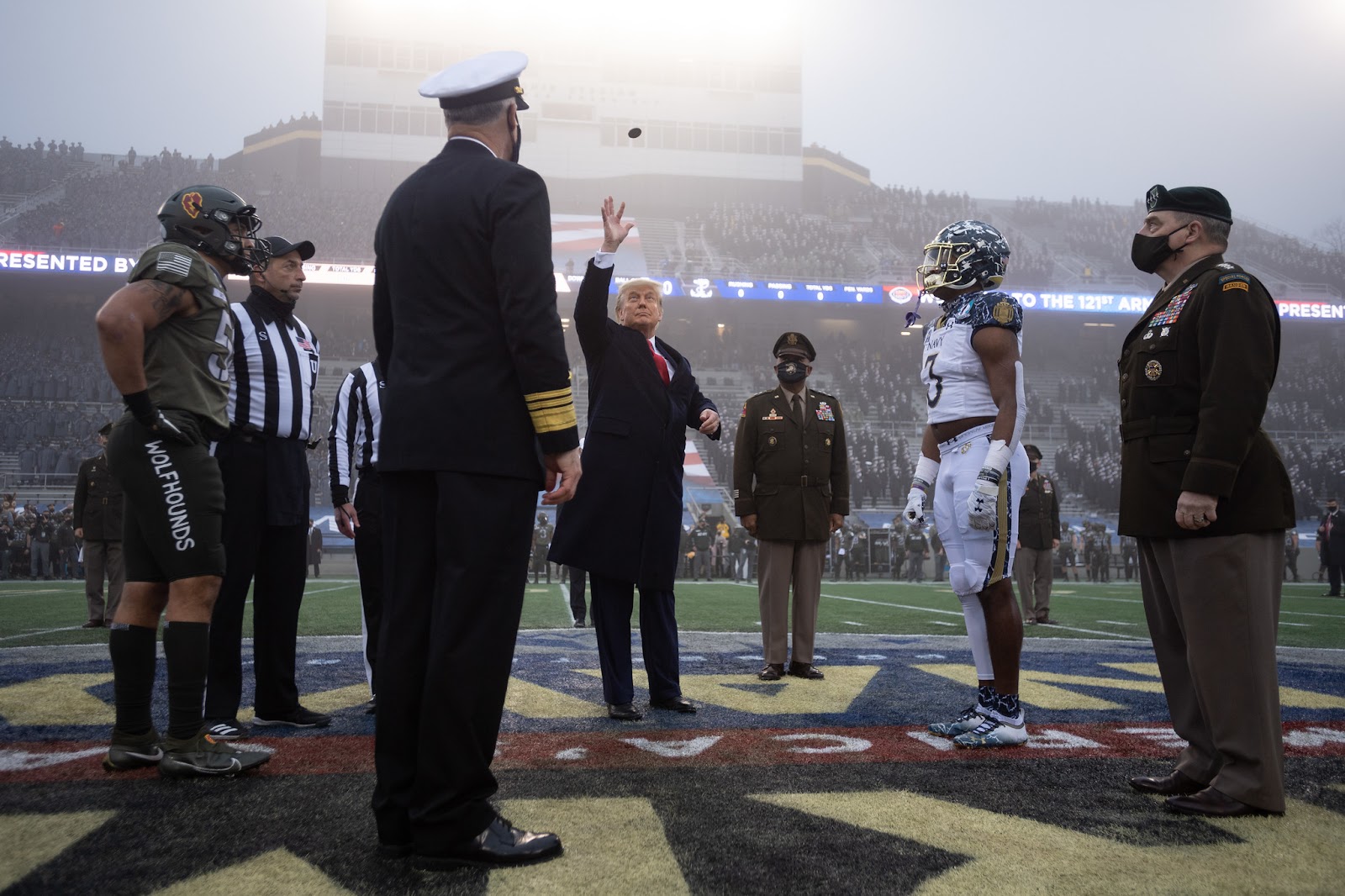 While most games are played in neutral territory at Philadelphia’s Lincoln Financial Field (or occasionally in a Baltimore or NJ stadium), last year, midshipmen left the Academy around 2:00 am to travel to the Saturday game up at Michie Stadium at West Point. A long train of buses delivered the midshipmen to West Point, where they spent the day “tailgating” in a field house with cornhole, limbo and other fun games. Some jawing and pranks are also an important part of this experience--all in the name of fun and good-spirited rivalry. 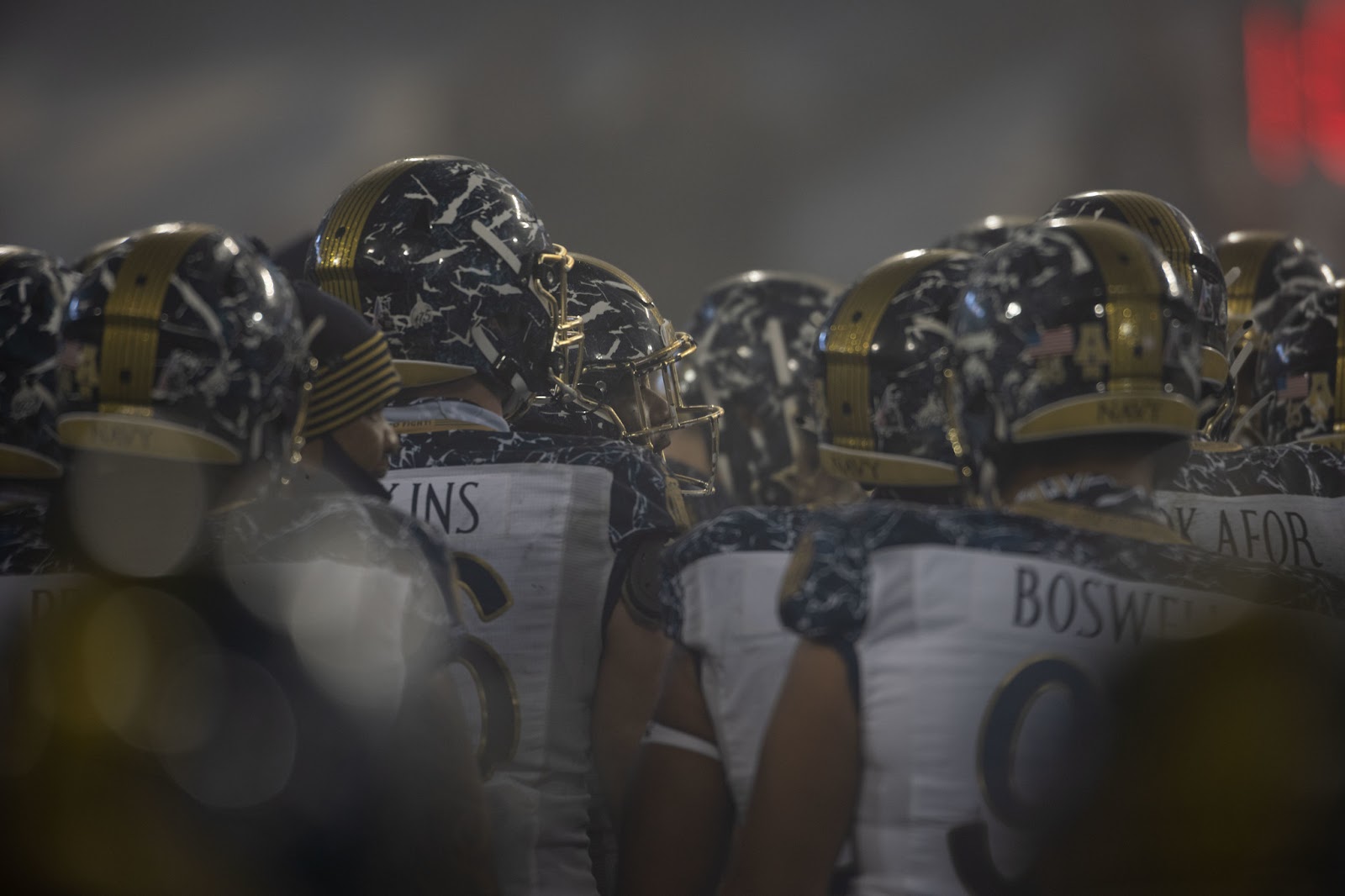 I got to travel the long road, too. While I didn’t bring the luck that the midshipmen needed last year (the final score was 0-15), and they didn’t bring home the win, there was no stopping the spirit of competition backed by 130 years of tradition.

The midshipmen and I are ready to retake our bragging rights in this year’s epic rivalry. My blanket is clean and my horns are looking sharp! Get ready to cheer and show that Navy spirit and pride!

If you’re heading to the Army-Navy game, you’ll want some spiritwear. In addition to the just-released Rivalry Uniform items, Navyonlin 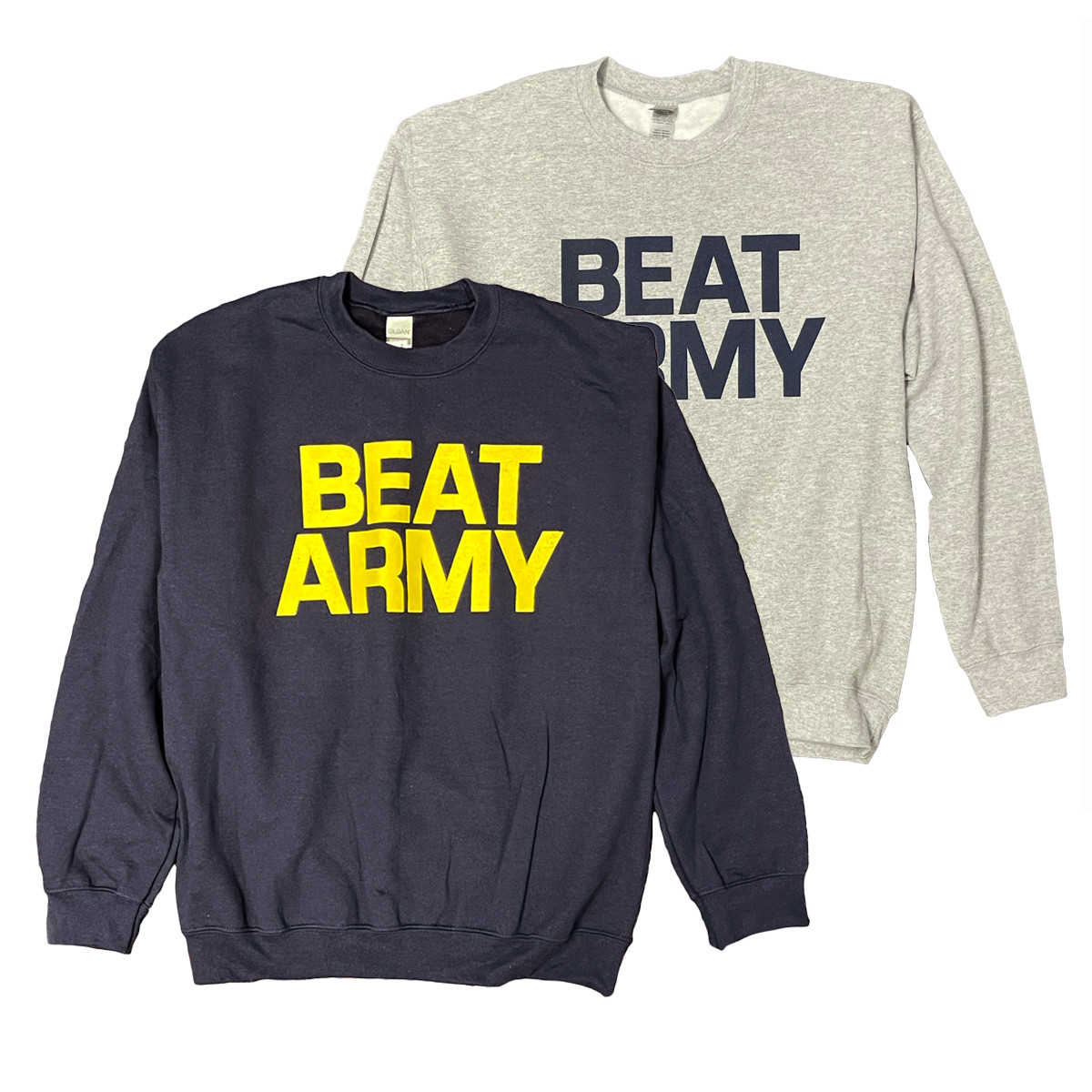 e has some handsome striped pom pom knit beanies to

keep you warm as you tailgate and cheer from the bleachers. They also have Beat Army crewneck sweatshirts, which are perfect for layering (and a great way to root for the team). If you need protection while traveling, these “Go Navy Beat Army!” double-sided face masks do the job right. With your Navy gear, there will be no doubt w

hich academy you’re supporting - but just in case, be sure to fly the flag featuring Bill the Goat and let the Army fans know they should “Fear the Goat!” 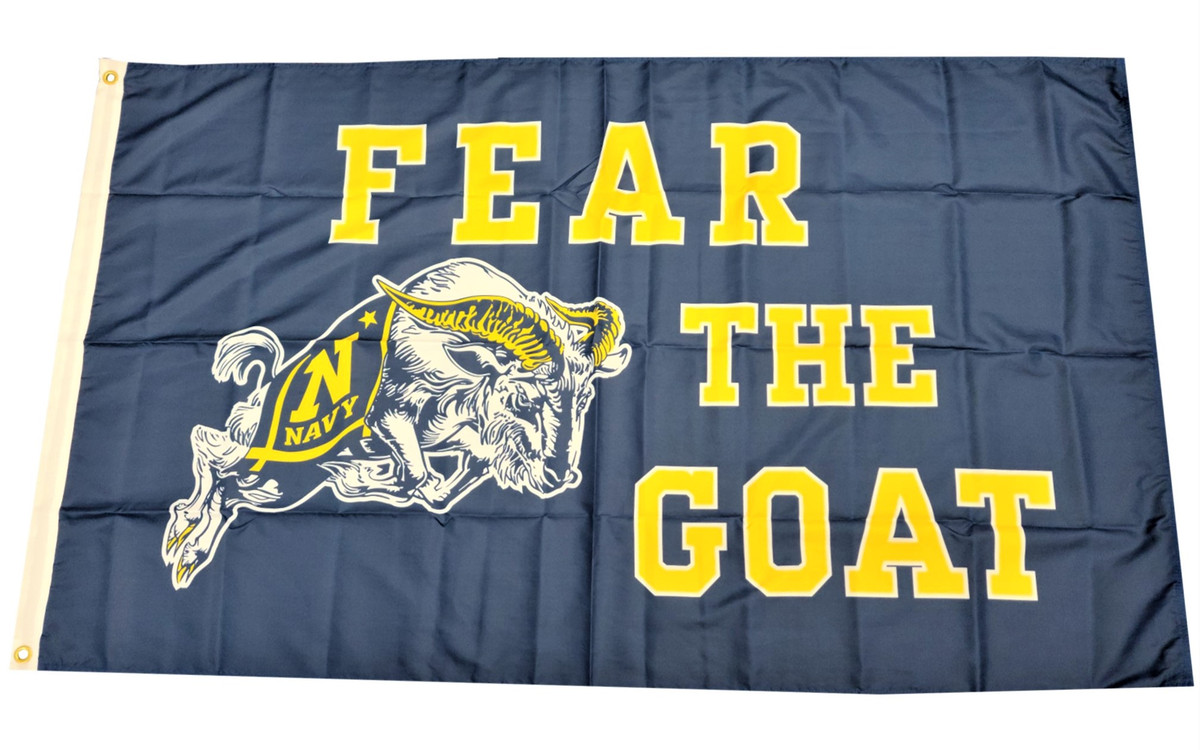 Whether you’re joining us at the game or watching from the comfort of your couch, know you’re taking place in a century-old tradition. Nothing quite captures the enduring strength of our military bonds in the civilian arena like the good old-fashioned Army-Navy rivalry. Come join in the fun, and watch us goats run over the mule one more time! Go Navy Beat Army! 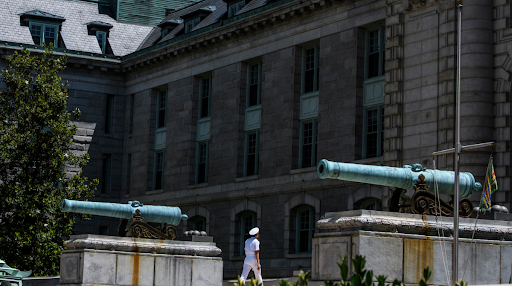 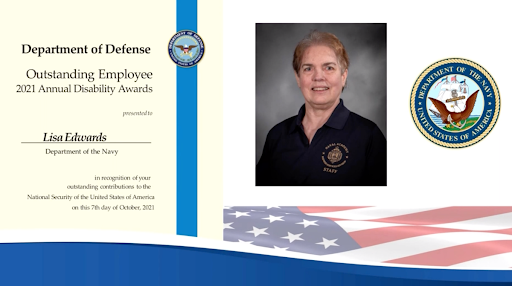 Behind the Scenes: Lisa Edwards and 26,000 Towels