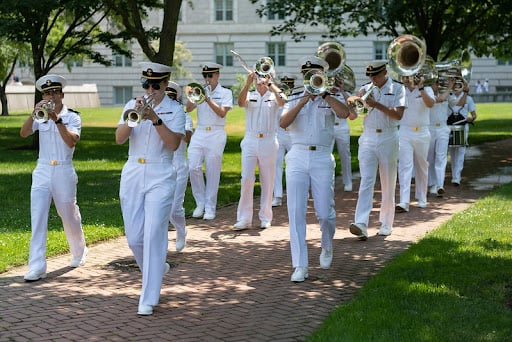 USNA Commissioning Week 2022 will be here before we know it. This year, it runs from Friday, May 20 - Friday, May 27, and it will not disappoint! This special time of commemoration, celebration, and of course, commissioning is one of the most anticipated weeks of the year. 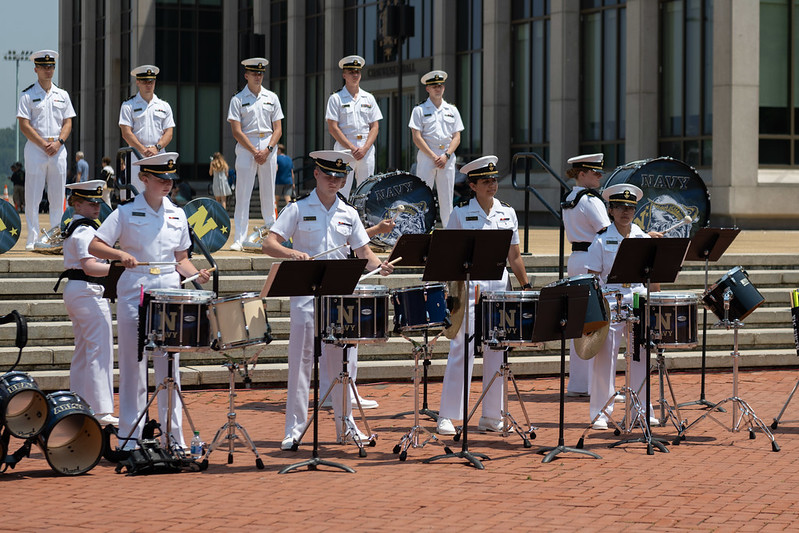 There are too many traditions to name. The Herndon Climb turns plebes into fourth class midshipmen, the Blue Angels flyovers instill heart-pounding pride with every pass, and the graduation itself has hats flying, coins given, and a serious pomp and circumstance as the graduates embark on their next chapter in the Navy. There are also two incredible musical traditions that make Commissioning Week so special. The USNA Drum & Bugle Corps and Pipes and Drums concerts are not to be missed. On Wednesday, May 25th, they’ll perform at Tecumseh Court and Radford Terrace after noon meal formation. Try not to have goosebumps when you hear “Anchors Aweigh.”

USNA Drum & Bugle Corps: The Pulse of the Brigade

The midshipmen-led USNA Drum & Bugle Corps is an ECA at the Naval Academy that hearkens back to 1914. It is the oldest active drum corps in the nation, and an excellent marching music ensemble. Currently, there are 100 midshipmen, spanning all classes and majors, playing instruments you might not expect for a group called the “Drum & Bugle Corps.” The current band includes piccolos, flutes, clarinets, alto saxophones, tenor saxophones, trumpets, mellophones, trombones, baritones, tubas, and of course, percussion. They are an impressive group, these four-time champions of the Interservice Academy Drum & Bugle Corps Competition, and they perform over 200 times a year in support of the Brigade of Midshipmen and Navy athletics under the direction of Dr. Matthew Halligan, with Mr. Justin Miller serving as the Brass Caption Head and Mr. Zachary Scudlark serving as the Woodwind Caption Head.

You’ll find the Drum & Bugle Corps carries the midshipmen musically in every aspect of Naval Academy life, from Navy football game fight songs at the first kickoff, to halftime shows and rousing “Blue & Gold” renditions in the stands, to accompanying the midshipmen on the parade grounds or performing field and stage concerts across the country. They also furnish pep bands for many of the USNA sports teams and pump up the Brigade at pep rallies for important events. 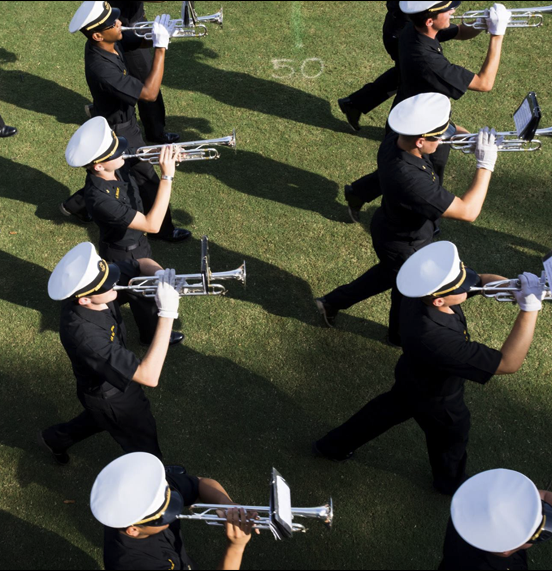 They’re like a college band, but better. The Corps goes beyond typical performances to be a military band for USNA events, providing martial music and drill for noon meal formation and dress parades. They also inspire the community with patriotic parades and performances throughout the world. As their site states, “Whether on the drill field or the football field, the D&B can be counted on as the pulse of the Brigade, keeping them in step while in formation and inspiring a unique brand of “Beat Army” spirit at sporting events.”

Starting on First Base: A USNA Drum & Bugle Corp History

In 1914, Midshipman R.W. Cary conducted sixteen of the first Drum & Bugle Corp members at a St. John’s College versus Navy baseball game. It was a hit. For the next eight years, there were about 59 midshipmen joining in on the fun. It got bigger and better, with each succeeding year hoping to outdo the last. In the late '30s, one report said, "it was an impressive sight to see the Drum & Bugle Corps, then known affectionately as ‘The Hell Cats,‘ swinging out on the field in full dress with the white cross-belts shining out against the blue of their uniforms, their precision marching and music providing lift and rhythm to the tired feet of the regiment."

USNA Pipes and Drums: The Fighting Spirit of the Navy

Equally powerful, the USNA Pipes and Drums ECA is a passionate musical force, consisting of bagpipers, highland drummers and highland dancers. Founded in 1996 through an endowment from the Class of 1961, they are the only active duty pipe band in the Department of the Navy, and one of only two active duty pipe bands in the military; the other is the Corps of Cadets Pipes & Drums at West Point.

Their mission is to develop each member as a small unit leader through the framework of the military pipe band tradition, to provide quality musical support for official USNA functions, to cultivate martial spirit within the Brigade of Midshipmen, and to represent proudly the fighting spirit of the Navy. With traditional dress they stir the hearts of all with their resonant sound and foot-pounding dancing, which moves in time with the drums. Paying homage to the traditions of the Scottish Highlands, the USNA Pipes and Drums bring that history alive at every Navy event and well beyond the confines of the Yard.

All year long, the midshipmen-led ensemble performs in formal parades, formations, Celtic and Renaissance festivals, competitions, and on the concert stage. They have entertained audiences as far away as Scotland, as well as the New York City Tartan Day Parade and the Southeast Florida Pipe Band Competition in Fort Lauderdale, Florida. In Florida, they earned 1st Place in Pipes, 1st Place in Drums, and 1st Place Overall in their category.

Both ensembles bring the Naval Academy to vivid life. Watch their performances online or come see them in person for the experience of a lifetime. If you can’t make it to Commissioning Week, there are plenty of opportunities to see the USNA Drum & Bugle Corps or listen to their recordings. You can catch the Pipes and Drums and find their recordings online, too.

Visit the Naval Academy soon. You’ll support all of the midshipmen since your dining, touring and enjoyment of their music all go right back to the Brigade. Come watch history in action! 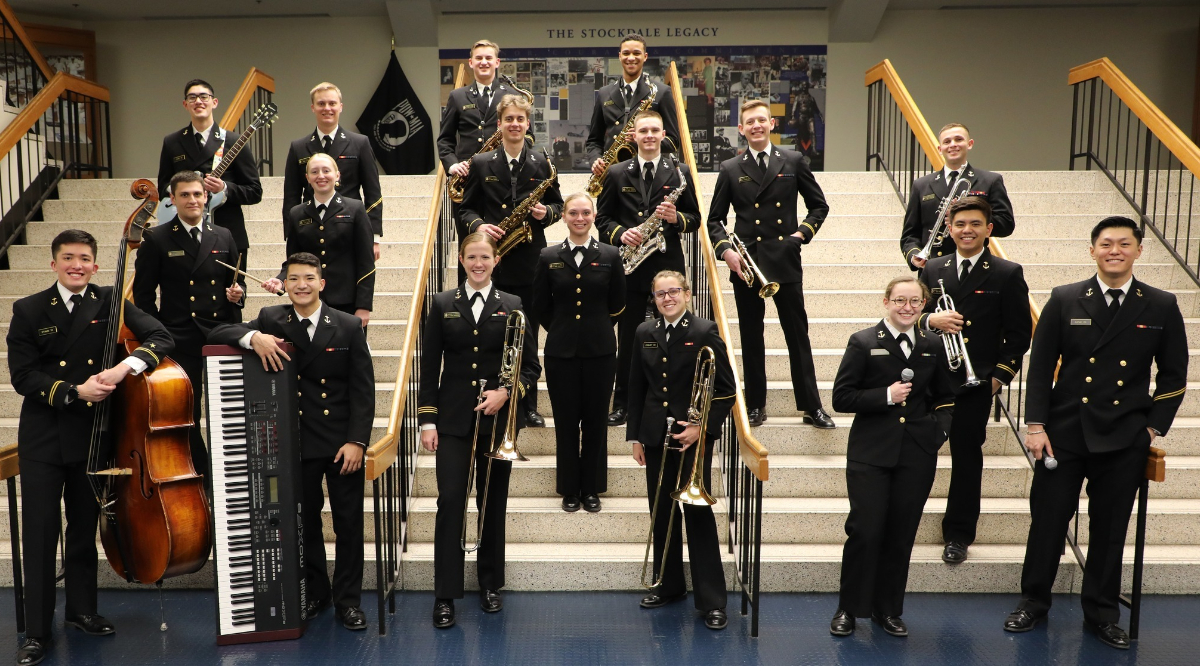 Trident Brass: Bringing Their Groove to the Yard

The USNA Gift Shop - Not Your Average Gift Shop