Christmas, and all its traditions, are coming to Annapolis. We invite you to join us in listening to the soaring strains of Handel’s Messiah ringing from the depths of the USNA Chapel. This enduring classical Christmas music performance is a wonderful way to kick off the celebrations of the season. From the buoyant “For Unto Us a Child is Born” to the jubilant “Hallelujah Chorus,” Handel’s Messiah is bursting with Christmas joy.

The Naval Academy Glee Club has been performing Handel’s Messiah for more than seven decades. Most recently, this incredibly moving composition has been performed under the leadership of Director Dr. Aaron Smith. Experiencing this musical fete is certainly one of the best ways to celebrate Christmas in Annapolis.

For Unto Us: Handel’s Messiah

Legend has it that George Frideric Handel composed this piece in only 24 days with little rest and even fewer meals. When he worked on “Hallelujah Chorus,” his servant recalled him saying, with tears in his eyes, “I did think I did see all Heaven before me, and the great God Himself seated on His throne, with His company of Angels.”

Originally composed as Easter music, the history of this timeless piece is intriguing, too. Messiah is the most often performed of Western oratorios. It was composed by the German-born English composer George Frideric Handel and the lyrics were written by Charles Jennens, a friend of Handel’s and a wealthy patron of the arts. The piece debuted on April 13,1742 in Dublin, Ireland during Lent, to great acclaim. Although it is noted that King George II originally stood for the Hallelujah Chorus at the London debut in 1743, the reception to the piece there was muted. It grew in popularity, though, when the King, Handel’s former patron in Hanover, had it performed for his bishop's appointment in London in 1748. The Messiah struck a chord—it was unlike any other music at the time. According to music enthusiast Andrew Mellor, “It pretty much coined a new genre—part German passion, part English church anthem, part Italian opera.”

The song is structured in three parts mirroring the sections of the Bible:

Under the tutelage of Dr. Aaron Smith, Director of Musical Activities and Chairman of the USNA Music Department, the Men’s and Women’s Glee Club presents two Messiah performances each year. Before he came to the Academy, Dr. Smith earned a reputation as one of New York City’s most successful choral conductors, having directed performances at Carnegie Hall, Lincoln Center, Kennedy Center and other well-known concert halls and churches across the globe. He has collaborated with the New York Philharmonic, Philadelphia Orchestra, Minnesota Orchestra and more, and has worked with esteemed soloists including Renee Fleming, Stephanie Blythe, Gregory Kunde and Beyonce. Many of Dr. Smith’s performances were also featured on television and radio programs.

Let Christmas magic transport you on Saturday and Sunday, December 4th and 5th in the USNA Chapel.

Come experience the USNA Glee Club’s performance with the Annapolis Symphony Orchestra and soloists from the Metropolitan Opera Company. Revel in the history, beauty, and significance of the goosebump-inducing Handel’s Messiah. Tickets go on sale to the public starting Monday, November 15th at 9am and can be purchased through the Midshipmen Welfare Fund music and theater ticket office.

The Yard will also be dressed in its Christmas best, decked with festive lights and greenery throughout. Stroll the sidewalks and take in the pure winter air as you celebrate this especially meaningful time. You can enjoy a meal before the concert and explore the Yard in all its majesty after, with the musical strains of Messiah, like sugarplums, still dancing in your head. 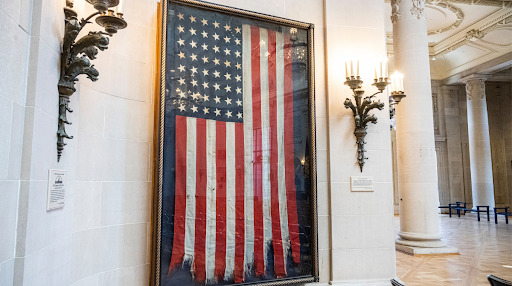