A Walk Through Mahan Hall, Home to USNA Theater

Mahan Hall (pronounced ma-HAN) has a rich and intriguing history. Opening to much acclaim in 1907, the hall was built as the centerpiece of three academic buildings on the Quadrangle (as one of the main pillars of Ernest Flagg’s “new academy”). It remains a major American example of the Beaux-Arts style that Flagg favored and serves as an inspiring piece of Naval Academy architecture.


Originally built to house the beautifully designed and decorated main library and auditorium for the Brigade of Midshipmen’s plays and lectures, Mahan Hall’s function has changed over the years as the needs of a growing brigade evolved. Its beauty, however, has stood the test of time.

The building was named in honor of Rear Admiral Alfred Thayer Mahan (1840-1914), who was a naval strategist and historian who also authored biographies of Vice-Admiral Horatio Nelson and Admiral David Glasgow Farragut. Rear Admiral Mahan graduated in the class of 1859, and is legendary for being the only USNA graduate to not have had a plebe year. He is also well known for penning the epochal book The Influence of Sea Power Upon History, as well as the corresponding series of lectures which became the defining mission of the Naval War College. His convictions regarding sea power as a “determinant of national strength” formed the basis for the Navy’s focus on becoming a dominant power on the seas.

Stepping Inside This Iconic USNA Building 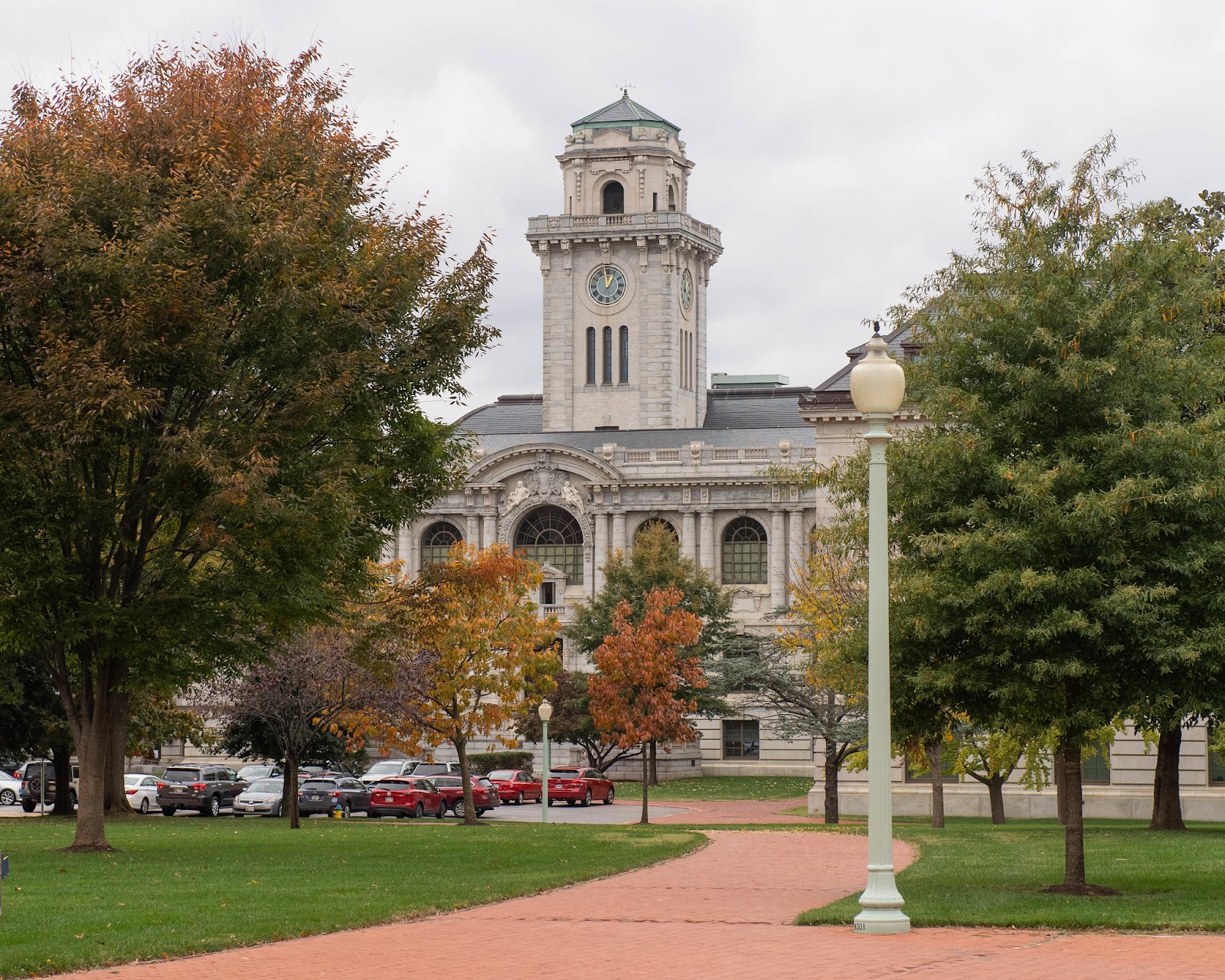 A recent post explored the significance of many of the outer Mahan Hall architectural features, and a walk through the Hall provides an even richer look at naval history. When you pass through the main doors, the entrance is impressive, with a front hall that stretches 135 feet long and 34 feet deep. Awe-inspiring vaulted ceilings rise above platforms that showcase art and other treasures, creating a museum-like feeling. The magnificent staircase that anchors the space leads up to the beautiful Hart Room. The Hart Room served as a reading room from 1907 until 1973, when the Nimitz Library was built to provide more space for the growing library and better accommodate the academic and research needs of the rapidly expanding midshipmen classes. Mahan Hall was then repurposed as a lecture hall and the home theater for the club theater group, the USNA Masqueraders. 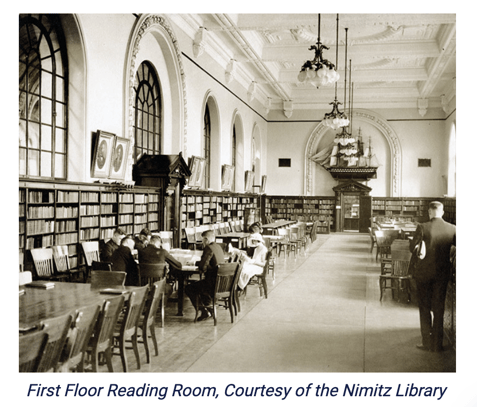 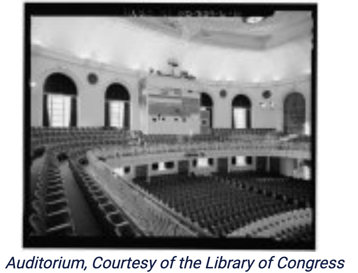 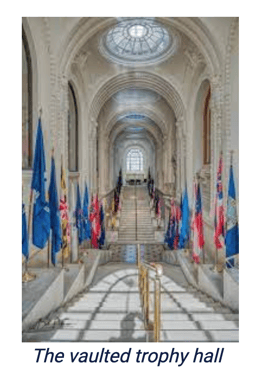 In addition to housing the auditorium, Mahan Hall is also home to a number of Navy treasures. The Yard as a whole serves as a military museum that protects and displays many of the historically significant flags, artwork, busts, ordinances, and other items that have been donated throughout the years.

Mahan Hall is especially known for its flag collection. In fact, the first alcove you see upon entering the building proudly displays six recessed glass cases, specifically designed to showcase the impressive collection of flags that sailors captured from British ships during the War of 1812. As you ascend the staircase, you’ll pass by a veritable welcoming line of state flags. The beautifully decorated auditorium also displays historic flags.

There is probably no more prolific collection than the set of flags from the War of 1812. After his Battle of Lake Erie victory, Commodore Oliver Hazard Perry sent Captain James Lawrence’s original “Don’t Give Up The Ship” flag, along with a number of other flags, pennants and ensigns (military flags) to Washington. In 1849, President James K. Polk designated they become a part of the permanent collection of the Academy.

Thus began a heroic effort by flag conservator Amelia Fowler (who later restored the flag we call the Star Spangled Banner), along with 40 other seamstresses, who restored the 15,000 square yards of the Perry flag as well as 171 other flags, many of which you can enjoy today. You can find the original “Don’t Give Up The Ship” flag hanging as the larger-than-life centerpiece of Memorial Hall, and the others displayed across 41 cases and 23 paneled spaces in both Mahan Hall and Smoke Hall (in Bancroft Hall). Mahan Hall holds the only British royal standard (military flag) taken by capture, at Toronto (then York) during the War of 1812. Also of note is the ensign of the British frigate HMS Macedonian, whose figurehead monument is not far from Mahan Hall at the foot of Stribling Walk. There are a number of flags from other wars as well, including World Wars I and II, and the conflicts in Korea and Vietnam.

More Treasures from the Depths of the Navy

In addition to flags, Mahan Hall hosts a large collection of naval objects that tell the illustrious story of their past. You can find impressive ordnances, including a Dahlgren 30-pounder rifled gun recovered from the USS Oneida fighting in Pensacola, Florida during the Civil War, a Spanish 12-pounder called “San Leon” from 1686 that was captured in the Mexican War in 1847, and a Spanish 17-inch mortar “Cobres” from 1779, which was acquired at Manila during the Spanish-American War in 1898. It still retains the 15-inch Dahlgren solid shot in its muzzle.

You’ll also find one of the most important documents that guides the U.S. Naval Academy to this day—the honor statement that is signed by all junior and senior midshipmen to pledge that they will not violate the Honor Code.

For these and many other reasons, Mahan Hall is a must-see on any USNA tour. From its stunning architecture to the wealth of naval history nestled in its beautiful spaces, it’s a hall that fully lives up to its namesake, honoring the man who brought sea power to the forefront of naval education and providing a place for history and the arts to live on today. Experience the beauty of the Beaux-Arts architecture for yourself as you tour the Yard! 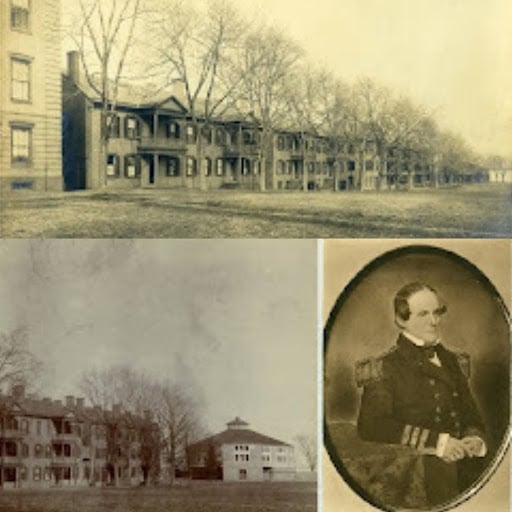 Before There Was Mother B 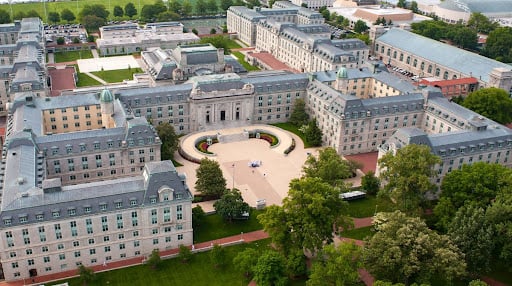