U.S. Naval Academy Uniforms: What Each Means and the Differences Between Them 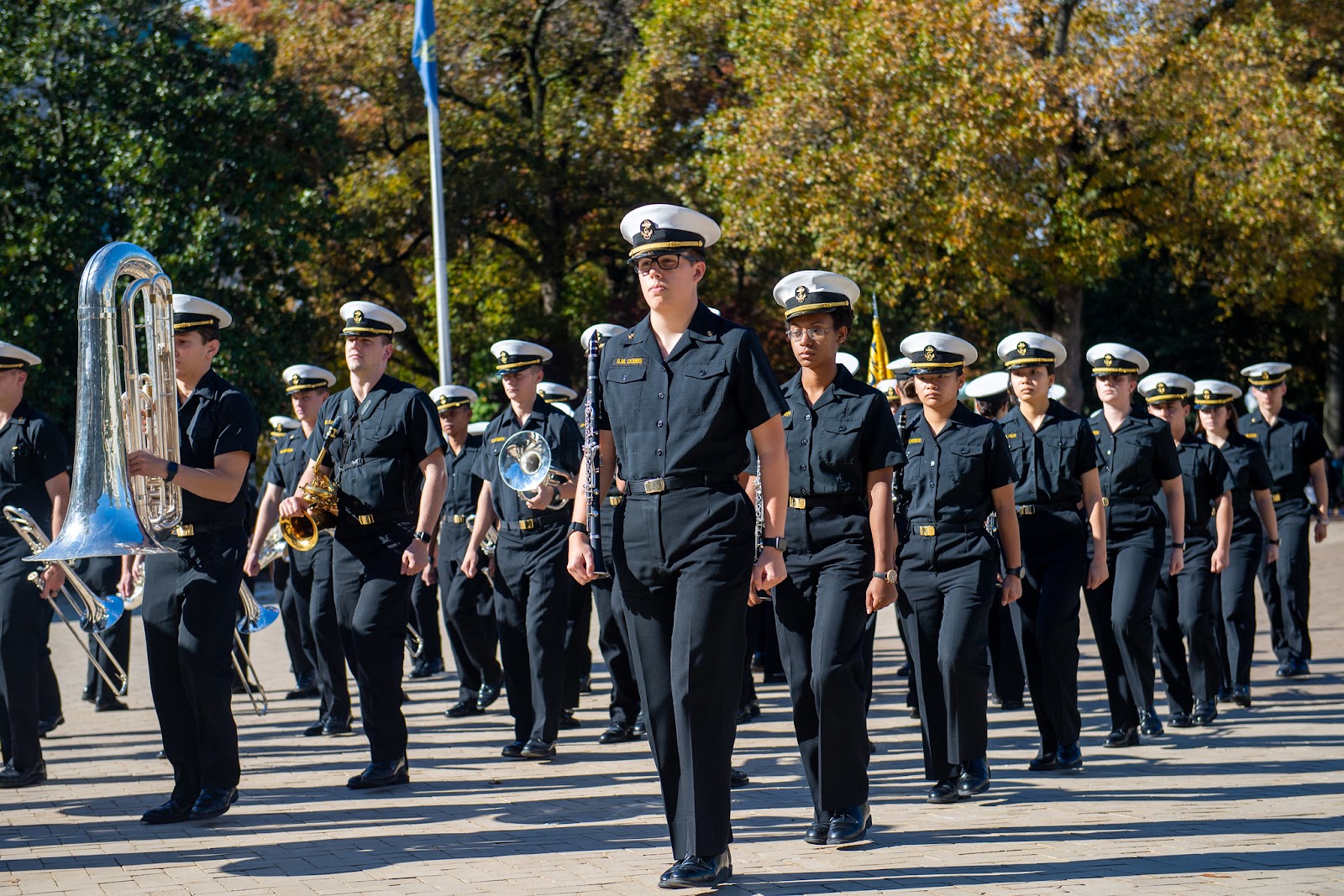 When you visit the Yard, one of the first things you’ll notice are the midshipmen, bustling from one class to the next in their crisp uniforms. Depending on the time of year or the event they’re attending, these midshipmen uniforms will change since they each have five main uniforms to rotate. The midshipmen keep each in pristine condition through their own diligent care, coupled with that of the attentive Naval Academy Business Services Division (NABSD’s) USNA laundry and dry cleaning facility. The NABSD’s USNA Uniform Store provides replacements and new uniforms, when needed. The Tailor Shop also alterations throughout their years at the Naval Academy to ensure that they’re a perfect fit every time.

Here’s a primer on when the midshipmen don specific uniforms and what each signifies. Now you’ll have the inside scoop!

Like everything at the U.S. Naval Academy, uniforms are handled with precision and tradition. Not only must they be maintained in impeccable condition (clean, well-pressed and well-fitting), they must adhere to uniform standards, which dictate that each event, season and day requires a specific assemblage of uniform items and accessories. Midshipmen must be “squared away” properly or will face reprimand. This starts on I-Day as they enter the Naval Academy, and continues throughout their U.S. Navy and Marine Corps careers. There’s a fascinating history behind how the uniforms have evolved to their present day iterations. No matter the time period, the proper uniforms and their proper maintenance are always of utmost importance.

The dress code has three specifications of wear:

1. Required Items (Basic Uniform Components): The minimum items that must be worn unless the prescribing authority directs otherwise.

3. Optional Items: Uniform items purchased at the wearer’s expense; these may accompany the basic uniform, but are not Prescribable. Optional items may be worn with the basic uniform at the individual’s discretion unless otherwise directed.

Midshipmen have five different uniform categories: 1) Plebe Summer, 2) Working, 3) Service, 4) Service Dress and 5) Dinner (Formal) Dress. While there are others they will wear from time to time, here are the five main uniforms you’ll find on the Yard and around Annapolis. 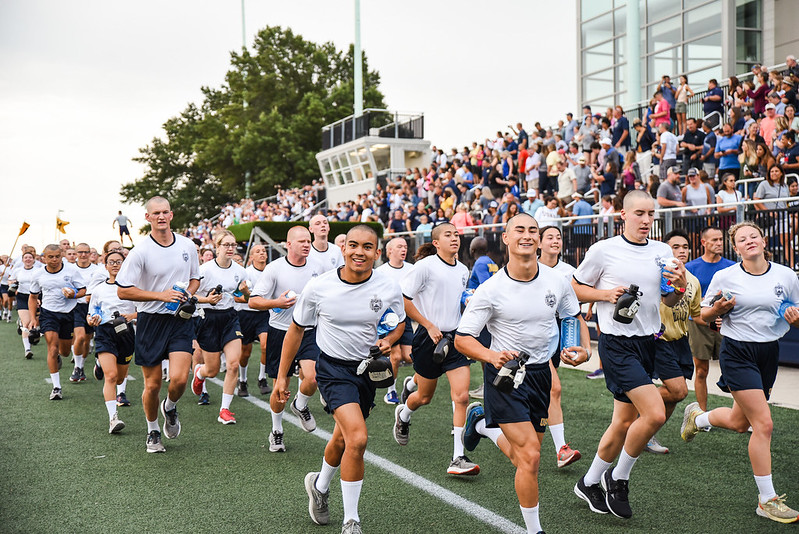 Plebe Summer is always hot and humid. The newest midshipmen have several uniforms that are designed expressly for these conditions—the working uniform (described below) and the Physical Education uniform, with Navy gym shorts, a Navy ringed tee, sneakers and socks. 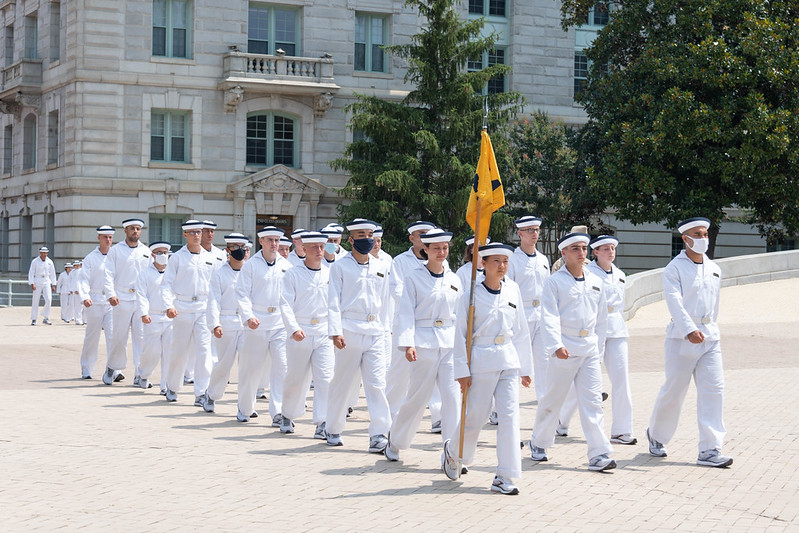 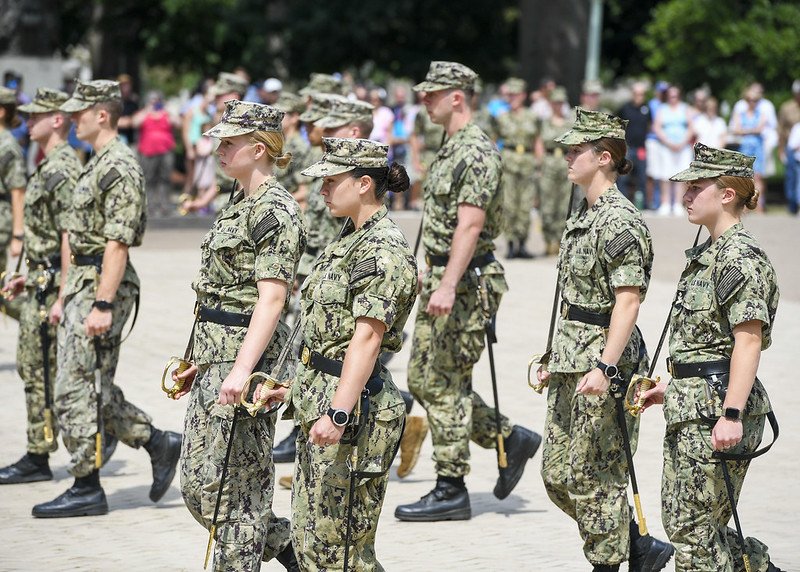 When midshipmen uniforms become “unduly soiled” or are otherwise not suited to a task, the midshipmen don working uniforms. Currently, there are two types of Navy Working Uniforms (NWU): Type II and Type III. They usually use Type III for specific training or evolutions like Plebe Summer, Anti-terrorism Force Protection (ATFP) drills and other events as directed by the Unit Commander. 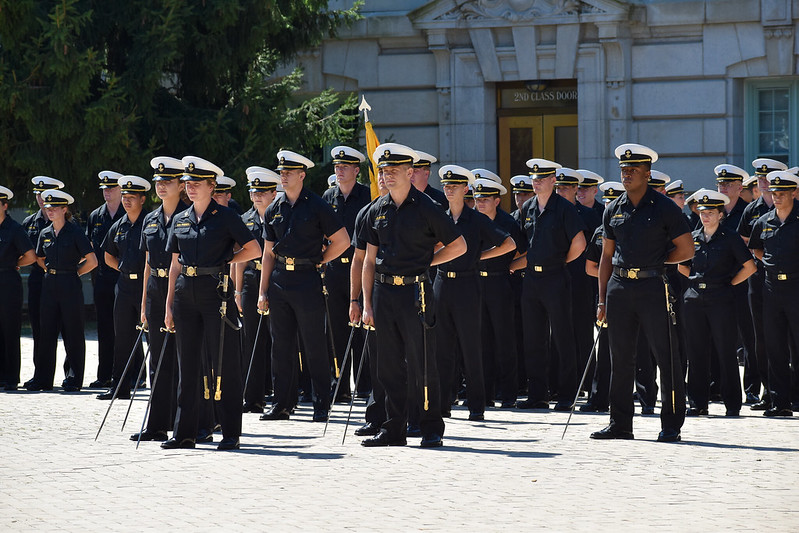 The Brigade wears a Working Uniform when they attend classes during the academic year. These feature dark trousers with a dark short sleeved shirt. 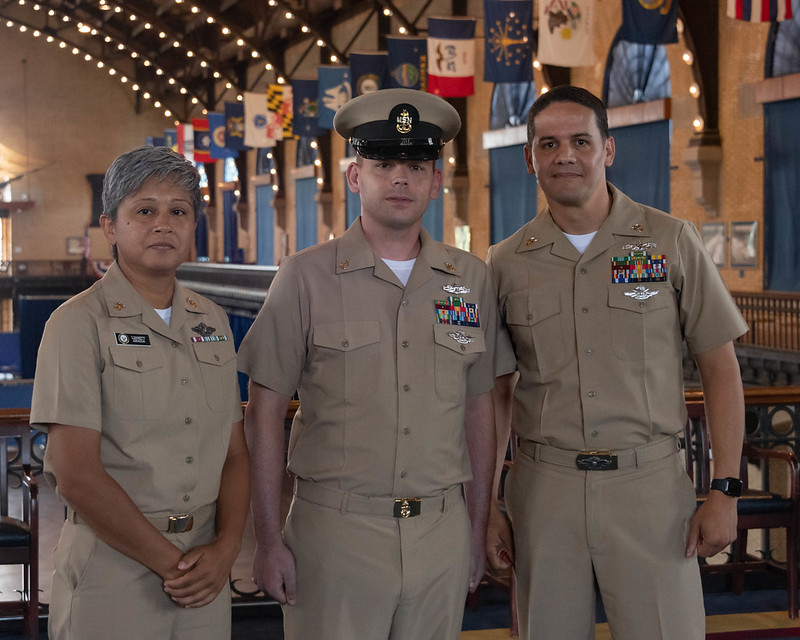 Service Uniforms are the commonly seen “everyday uniforms,” designed for going to class, standing watch or when prescribed as uniform of the day. The service khaki uniform is worn to Summer School, Summer Cruise, Summer Training programs and is also worn by the Plebe Summer Detailers. It has a khaki button-down shirt with trousers for both men and women. Midshipmen also wear a Garrison cap and a name tag, and there is collar insignia and ribbons. The Prescribable for this Naval Academy daily uniform even contains swords! 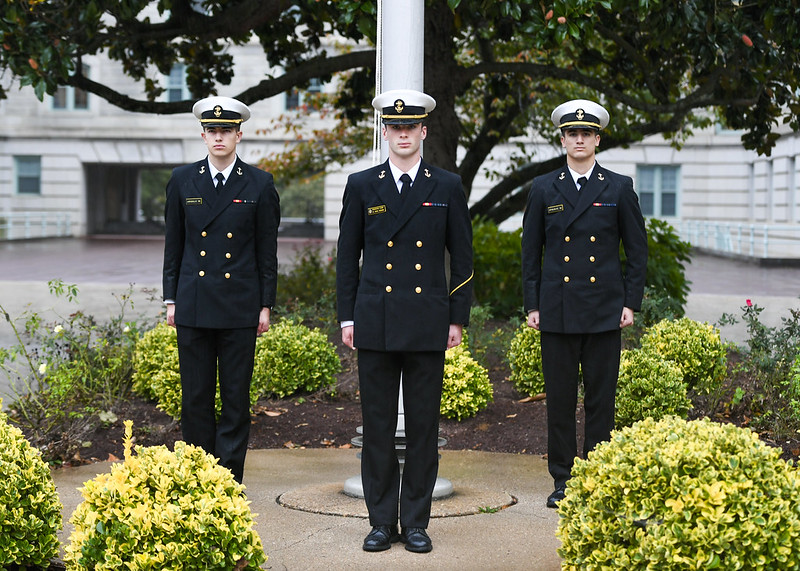 For official functions that do not warrant full Dinner Dress attire, midshipmen wear Service Dress, the USNA’s version of coat and tie. Depending upon geography and the corresponding climate, Service Dress may be seasonal; it can be worn year-round to official functions like a hearing with the Superintendent or Commandant, Academic or Aptitude Boards and other important occasions when Formal Dress or Full Dress are not prescribed. The white is used for graduation ceremonies for those commissioning into the fleet while Marines wear the USMC blues. 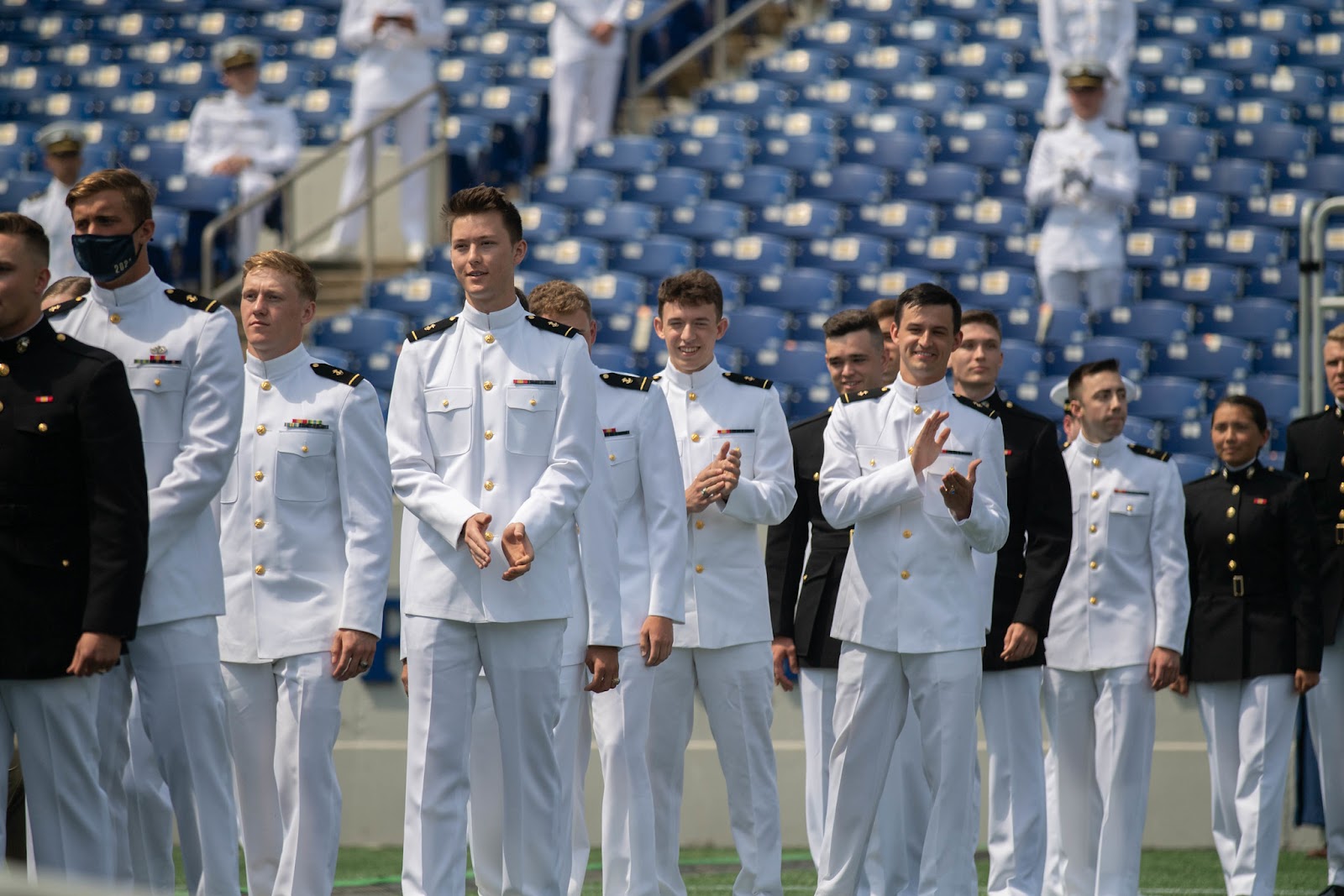 For Service Dress, both men and women wear a necktie (cross-over neck tab for women) for the blue version. They also have name tags, large breast insignia and ribbons. The white version has white shoes. Gloves fall under Prescribable, and optional items may include the all-important umbrella. 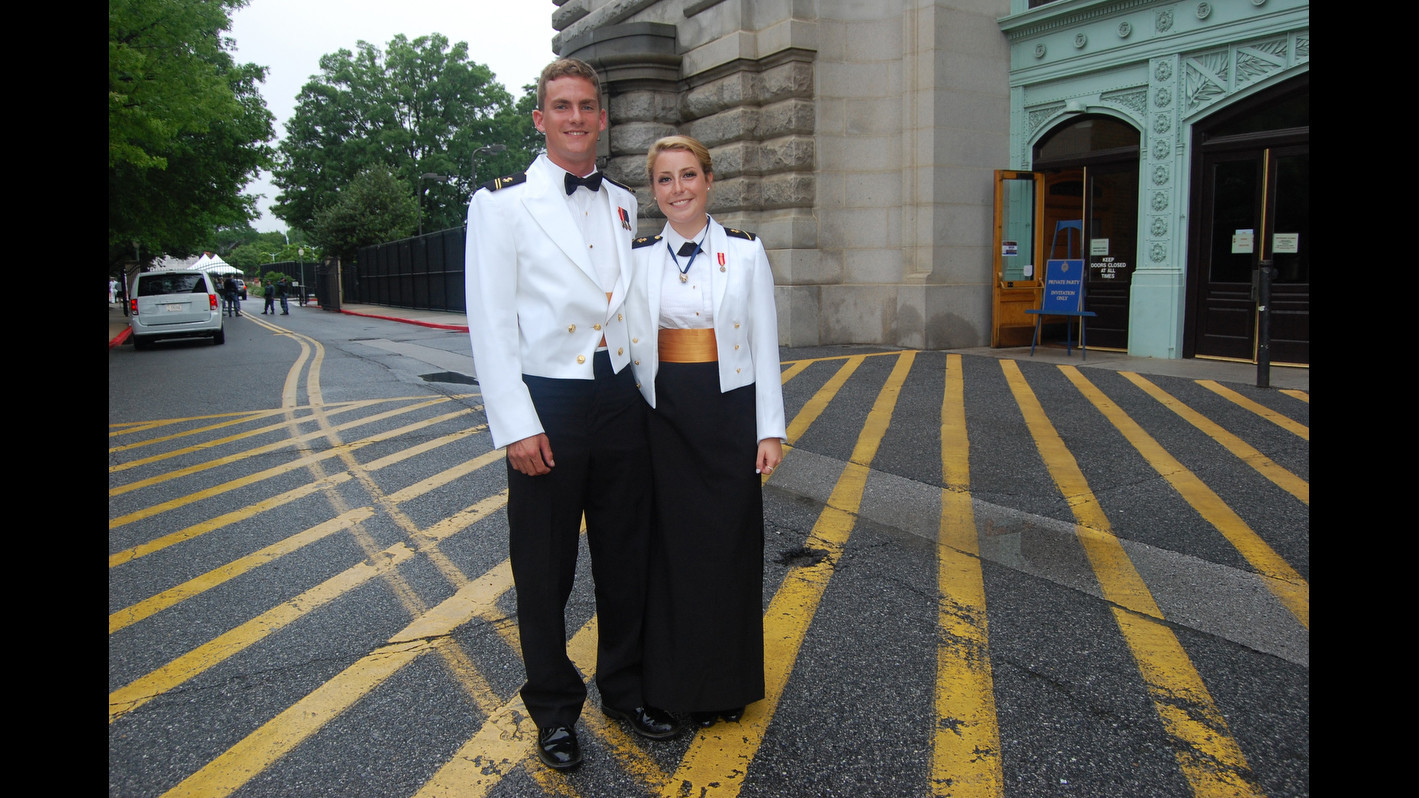 Called “formal dress,” Dinner Dress is prescribed for notable occasions, including the USNA Ring Dance or on evenings when the midshipmen are dining out. Academy dress uniforms are equivalent to civilian “black tie” wear. The Dinner Dress can be worn several ways. Men can wear it with a lower cut double-breasted blue jacket, use the same look in white, or wear a “dinner dress blue” with a service dress jacket (for midshipmen who have not yet received their dinner dress blue jacket). The dark uniform works with winter events and the white is for summer. All include a necktie for men and have miniature medals and miniature breast insignia. Leather or white gloves are prescribable items for this uniform, and an umbrella is optional.

Women wear a black neck tab for the first two options with a long skirt. For the Dress Blue, they wear a cross over neck tab and can also wear a skirt with these. Gloves are prescribed items. Optional items include earrings and a handbag (only for liberty). Like the men’s uniforms, an umbrella is recommended for rainy weather.

See the Uniforms in Action

The best way to get a glimpse of these uniforms is to come to the Naval Academy. Watch the midshipmen in Noon Meal Formation, and take a leisurely tour of the Yard. When you visit USNA, your touring, dining and shopping support the entire Brigade since all profits go to the midshipmen. Come experience history in the making and see these uniforms in person. Welcome aboard the Yard! 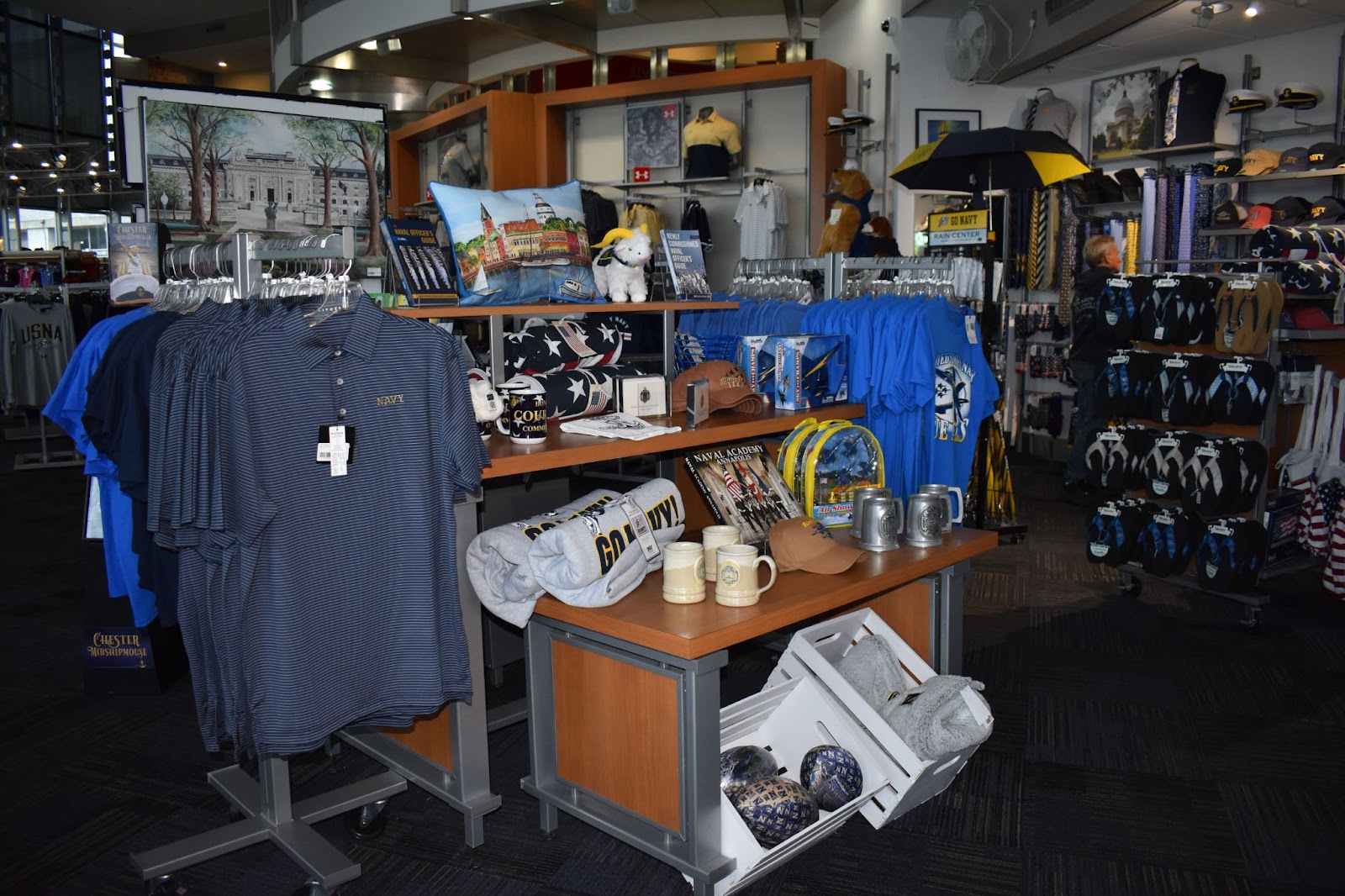 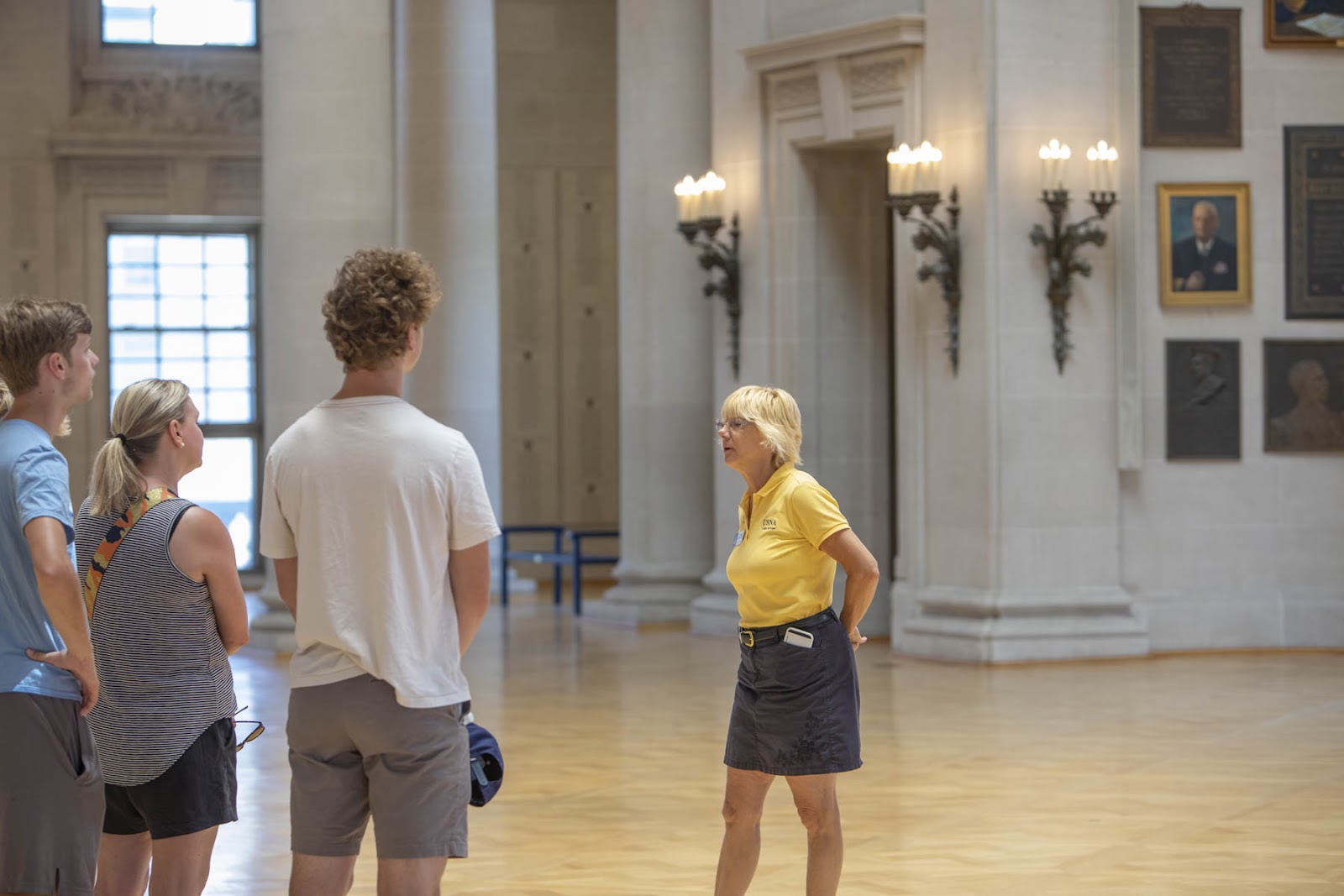